Don't Want to Miss a Thing!

My greatest confession this week - I built my first Lego ship. I crawled out of bed one morning, poked my head into the big boys room and said "Good Morning". They asked if I would play with them. Then, they asked the dreaded question I have been avoiding for a very long time... "Mommy, do you want to build a space ship with us?"


To be clear, I am not sure if I am confessing that it has taken me this long to pick up some Lego bricks and build something, or confessing that I sat on the floor for 20 minutes trying to make something that looks like something. Just so we're clear...

For years I have said I am not genetically conditioned to build Lego things. The 20 minutes it took to build this small vessel proved it. I used parts of the "Cars" Lego set AND "Star Wars" Lego sets. Can ya tell? 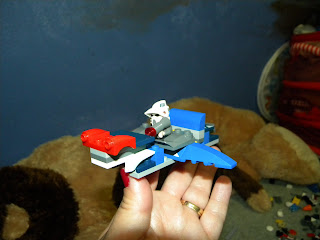 I also figured I'd post the pic my son took of me and my ship as well, I mean really, why not? 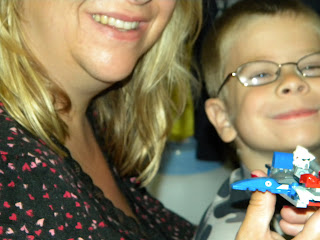 Stunning, I know. You didn't actually think I'd post my WHOLE "wake-up" face on the internet did you? Nope. I'm all about being "real" but wrinkly eyebrow hair and bed head, those glorious gifts are saved for the closest people who promise to love me forever.

Both fellas were pretty proud of me. Honestly, I was too.

Isn't rather odd that I wouldn't post a picture of my morning face online BUT I'd post this picture? 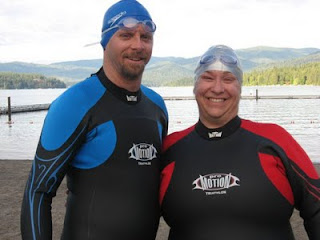 It made me laugh so hard! When I first saw it, my kids came RUNNING to the computer to see what mommy was laughing at... it took them all of two seconds to break into gut-bustin' laughter themselves. "Mommy! You look funny!"

I participated in my second triathlon last weekend. My first was in September of last year. It was a major adventure. The funniest thing that came out of this one, other than me singing on my bike to take my mind off the burning muscles in my legs, was the boys asking me when we were on our way home,

"When I do a triathlon, can the day be all about me?"

Apparently Nana shared with them that the day was not about them, but about Daddy and Mommy, so they needed to celebrate us and not be so focused on themselves. We said, "yes, when you do a triathlon, the day can be all about you." My Love and I exchanged grins both thinking the same thing, "uh, every day is about you fellas. Every day." But, they are too small to get that. Someday, when they have kids their own... they'll get it. And they won't mind much either.

Here is a pic of me heading out for my 12 mile bike ride. My legs are numb and I have no idea I have massive cleavage hanging out, I am just focused on loving the sunshiney day! 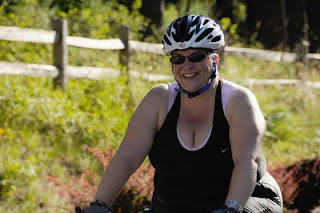 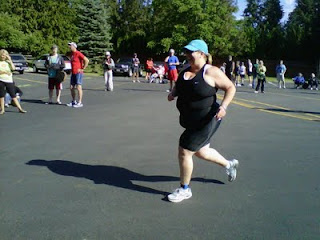 Again, I have numb legs (that is what happens when you keep asking your muscles to do different stuff really fast) but I am clueless to anything but busting (hee hee) out a good solid run on a beautiful day. My favorite thought on the run, its easy now, one foot in front of the other!! Note the big silly grin. Crazy girl!
Ultimate coolness is the goal here... is it the Lego Star Wars hat or the awesome shades?  He makes me think of Ponch, or is it Jon? (From CHiPs) 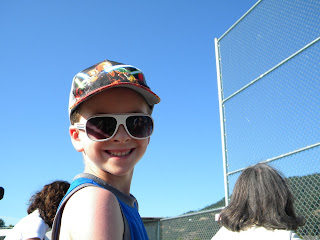 How about the slick lenses on this baby! Mr. Cool for sure! or is that The Terminator? "I'll be back." And his most frequent saying, "MomcanIholdyourkeysIpromiseIwon'tpushanybuttons." Yes, he says it just like that. My answer, "NO." 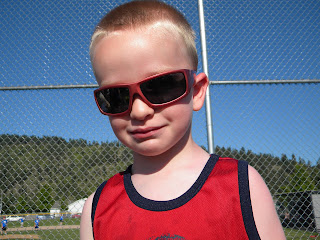 I had this thought once this week. "I am glad that's not my kid". Yes, I don't do it often, but I did it this week. Now, before you get annoyed for my judgmental self let me tell you what happened. A small rant - over something - small? 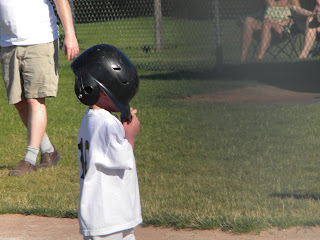 This little guy, whose identity has been self protected, was the tiniest little guy on the opposing team. I considered him adorable until he threw a spectacular fit when tagged out at first base. At which point I yelled (this part I am not proud of, well, maybe I wouldn't go that far)

"There's no crying in baseball!"

(remember Tom Hanks in the baseball movie with Madonna in it from the 90s?) Some of the other parents laughed, but then I was mortified when the coach allowed the temper tantrum crier, to COME BACK to first base and run the bases. I know, I am a hag for being so insensitive. But really, WHEN do you learn that getting tagged out means you are out? Just curious. It reminded me of the people who get to a four way stop before me and wave me on to be polite as if I have no idea what the ACTUAL rules of the road are.

My favorite things this week have been about doing things I like to do with my boys since I am in "rest" mode after my triathlon. I built the above ship, played "Go Fish", and snuggled while watching cartoons. I wish I'd done even more with them. I really like them. Oh, and we did play Mario Kart too... 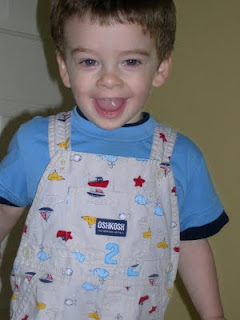 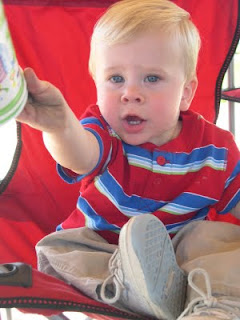 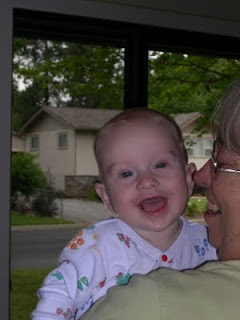 I continue to be fascinated by their growing up. Stunned almost at their growth, as if I haven't seen them almost every single day of their lives. I look back at some of these pictures and think "Where was I?" Of course, I was behind the camera, but WOW, time really does fly.

Posted by Jennifer - Live Courageous! at 7:42 AM

Aw, that's a really really good mantra to have. Loved seeing those baby pictures. I can't believe how different your middle guy looks than the others. Precious, all of them.

You and your triathalon pictures are just awesome.

confession: I have yet to make a lego ship! You win.